The SGDSAA annual interclub – commonly known as the “Rosebowl” is contested by the clubs making up Southern Gauteng. The zone nome comprises the following clubs: Nomads, TSC, Makaira, Guinjata, ERBFC and Albatros SC.

Each year a different club in the zone has the task of organising all aspects of the hotly contested competition.

All anglers present and registered on the Sunday prior to the start of the competition will officially compete in the Rose-Bowl scoring system, which is calculated as follows: –

A minimum of 20 anglers per club will be used for calculation purposes.

Congratulations to the Nomads Club and the Nomads team for again bringing the Rose Bowl home.

Day 1 Nomads went into the lead with the tag and release of a sailfish on the boat “My Dream” . Day two saw “Gaffer Dog” release a sailfish and day 3 “Gaffit” released a Blue marlin of approximately 200kg. The fishing was extremely slow and it shows the calibre of our anglers and skippers to have the above 3 billfish fish on the score board while all the other boats in the competition had not released any billfish to date. Freespool and RamKat also brought notable fish to the scale.

TSC, ERSBC  and Makaira started targeting game fish from day 4 and in the case of Makaira they almost beat us to the post due to some big Yellow fin Tuna being brought to the scales that had been caught on 6kg line. Day 5 started off with strong winds and although we launched the competition was called off at 08H30 due to gusting winds exceeding the 22 knot limit.

The food was great, the Wednesday night with the Karaoke was brilliant and the prize giving evening very successful. All the competitors enjoyed the occasion and  showed not only team spirit in their own clubs, but between the teams as well. I believe the Rose Bowl is a great means of gathering the Southern Gauteng anglers together to form friendships and the Rose Bowl goes a long way towards making Southern Gauteng the strongest province in the fishing fraternity.

To the organizers and our MC Dave Martin a very big thank you for a superb competition that was very well organized and run. 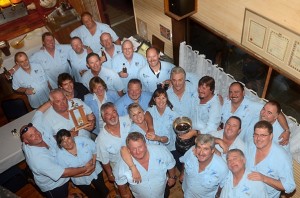 On Monday 5 March 2012, the organisers of the 2012 Rosebowl called off the competition due to the heavy seas and high rainfall brought about by Tropical Storm (IRINA).